“The role of physical activity in preventing cardiovascular disease (CVD) in people of working age is well established,” said Professor Riitta Antikainen, professor of geriatrics at the University of Oulu, Finland. “But relatively little is known about the effect of regular physical activity on CVD risk in older people.”
The present study assessed the association between leisure time physical activity and CVD risk and mortality in 2456 men and women aged 65 to 74 years who were enrolled into the National FINRISK Study between 1997 and 2007.

Baseline data collection included self-administered questionnaires on physical activity and other health related behaviour, clinical measurements (blood pressure, weight and height), and laboratory measurements including serum cholesterol. Participants were followed up until the end of 2013. Deaths were recorded from the National Causes of Death Register and incident CVD events (coronary heart disease and stroke) were collected from the National Hospital Discharge register.

When the researchers assessed the link between physical activity and outcome they adjusted for other cardiovascular risk factors (blood pressure, smoking and cholesterol) and social factors (marital status and education). To minimise reverse causality, where worse health leads to less physical activity, patients with coronary heart disease, heart failure, cancer, or prior stroke at baseline were excluded from the analysis.

Professor Antikainen said: “Our study provides further evidence that older adults who are physically active have a lower risk of coronary heart disease, stroke, and death from cardiovascular disease. The protective effect of leisure time physical activity is dose dependent – in other words, the more you do, the better. Activity is protective even if you have other risk factors for cardiovascular disease such as high cholesterol.”
She concluded: “Physical exercise may become more challenging with ageing. However, it is important for older people to still get enough safe physical activity to stay healthy after their transition to retirement.” 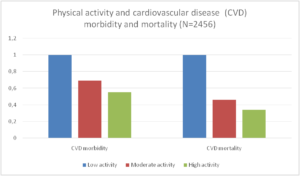