Topic(s): StrokeEnvironmental and Cardiovascular DiseasePublic Health & Health PolicyHealth Economics
Rome, Italy – 27 Aug 2016: Low socioeconomic status is associated with a higher risk of a second heart attack or stroke, according to research presented at ESC Congress 2016 today.(1) The study in nearly 30 000 patients with a prior heart attack found that the risk of a second event was 36% lower for those in the highest income quintile compared to the lowest and increased by 14% in divorced compared to married patients.

Lead author Dr Joel Ohm, a physician at the Karolinska University Hospital and Karolinska Institutet in Stockholm, Sweden, said: “Are you rich or poor? Married or divorced? That might affect your risk of a second heart attack or stroke. Advances in prevention and acute treatment have increased survival after heart attack and stroke over the past several decades. The result is that more people live with cardiovascular disease – in Sweden almost one fifth of the total population is in this group.”

Most research on cardiovascular prevention is based on healthy people and it is unclear if the findings apply to patients with established disease. An association between socioeconomic status in healthy individuals and future cardiovascular disease was found in the 1950s. This study investigated the link between socioeconomic status in patients who had survived a first heart attack and the risk of a second heart attack or a stroke.

The study included 29 953 patients from the Swedish nationwide registry, Secondary Prevention after Heart Intensive Care Admission (SEPHIA), who had been discharged approximately one year previously from a cardiac intensive care unit after treatment for a first myocardial infarction. Data on outcome over time and socioeconomic status (defined as disposable income, marital status and level of education) was obtained from Statistics Sweden and the National Board of Health and Welfare.

During an average follow up of four years, 2405 patients (8%) suffered a heart attack or stroke. After adjusting for age, gender, smoking status, and the defined measures of socioeconomic status, being divorced was independently associated with a 14% greater risk of a second event than being married. There was an independent and linear relationship between disposable income and the risk of a second event, with those in the highest quintile of income having a 36% lower risk than those in the lowest quintile (figures 1 and 2). A higher level of education was associated with a lower risk of events but the association was not significant after adjustment for income.

Dr Ohm said: “Our study shows that in the years following a first myocardial infarction, men and women with low socioeconomic status have a higher risk of suffering another heart attack or stroke. This is a new finding and suggests that socioeconomic status should be included in risk assessment for secondary prevention after a heart attack. Even though health care providers are unlikely to keep track of their patients’ yearly salary, simple questions about other socioeconomic variables such as marital status and educational level could make a difference.”
According to the widely used assessment tools for cardiovascular risk, survivors of heart attacks are at the highest possible risk for subsequent events regardless of other risk factors. There is, for example, no difference in estimated risk level between a previously healthy 40-year old female from Spain and a heavily smoking, obese, elderly man with diabetes and high blood pressure from Finland.

Dr Ohm said: “Risk assessment tools are designed for individuals without previous cardiovascular disease and the calculations may not apply to patients with established cardiovascular disease. Socioeconomic status is perhaps a better marker to assess risk of future events in heart attack patients and more research is needed to determine other factors that could be included, such as occupation or residential area.” 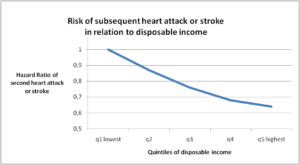 Figure 2. Proportion of patients free of a second incident heart attack or stroke (ASCVD or atherosclerotic cardiovascular disease) during follow-up time by quintiles of disposable income.